Are We Ready to Switch to Electric Cars? 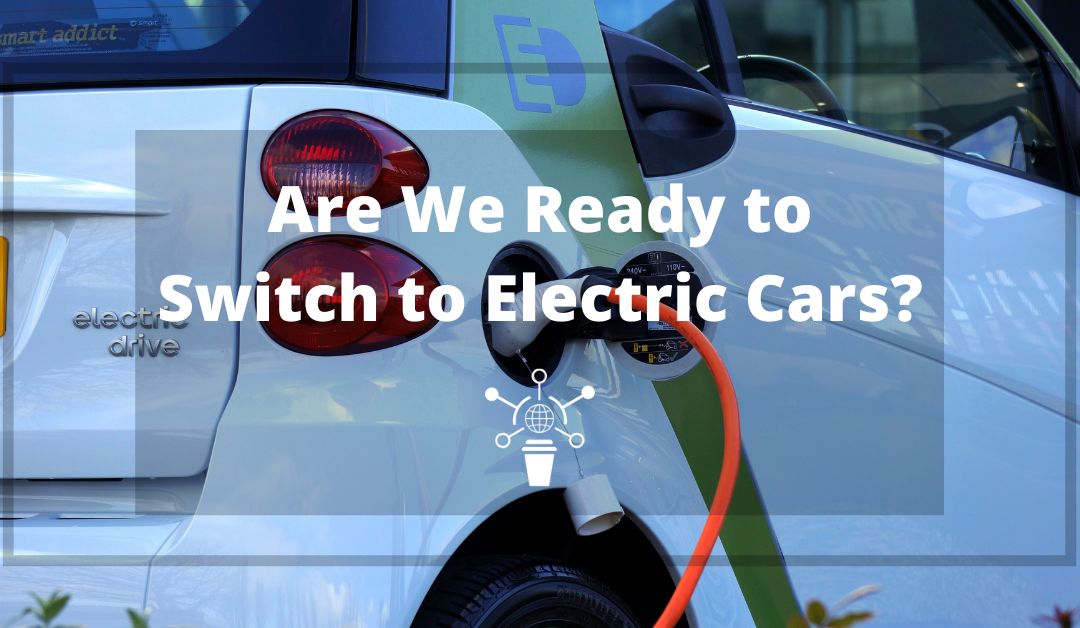 In the last few days, the main stories in tech have been centred around electric cars, after the headlines were dominated by huge companies Jaguar and Ford. The automotive giants announced their plans to switch to only producing electric cars ; Jaguar by 2025, and Ford by 2030. For many, it’s welcome news. The general idea is that companies will now be pressured to follow suit and potentially, will be inclined to push their dates forward in order to beat out the competition and become one of the first all-electric vehicle companies in the world.

But there is an aura of doubt and uncertainty surrounded the practicality of this quick switch. Whilst the UK government is offering incentives to convince people to switch, there are some concerns that the public have when considering ditching the petrol and diesel engines. There are so many questions that seem to be left unanswered and the information the public need doesn’t seem to be easily accessible. The question on a lot of people’s lips is this…

Are there enough charging stations?

Simply put, no there isn’t. Not yet, anyway. But luckily, the UK government have pledged just two weeks ago to allocate £20 million to local authorities to install charging points in public. The On-Street Residential Grant Scheme (ORCS) has been in effect since 2017, but the supply just simply isn’t reaching the demand, leaving a lot of people hesitant to purchase electric cars, or even the hybrid options. Since 2017, a total of 140 local authorities have been involved in schemes that has placed over 4,000 more charging points over those recent years. In total, there are now over 13,000 public charging points across the UK. But now that the next few years will see a huge surge in EV (electric vehicle) production, the new budget of £20 million is a welcome investment. 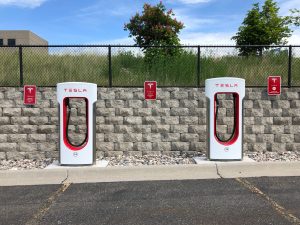 Currently, there are around 8,631 petrol stations across the UK, which is double the amount of charging stations. Although, it is still a huge drop in numbers since the 90’s, when the peak was around 18,000 and an even crazier drop since the 1960’s, when there were over 40,000 petrol stations across the UK. But as car engines were optimised over time, we were able to make them run on far less petrol, hence the need to more stations dropped hugely. But it does beg the question, what will be done with these stations when all we have on the roads are electric cars? Will they be replaced by fast-charge stations that charge in minutes? It’s possible.

Of course, home charging points are far more convenient than having to get to a charging station. You could hook your car up overnight, or whenever it’s idle, and never run low on power. But of course, people are worried about what charging such a large appliance would do to their electricity bill, and how much these charging points will be to install. And this brings us onto the next big question from the public…

How much do electric cars cost?

Well, turns out you can get a government grant for owning an EV that helps with the cost towards installation. The Electric Vehicle Homecharge Scheme provides up to £350 for drivers who have bought, or leased, a new or second hand eligible electric vehicle on or after 1 October 2016, as long as they have not claimed against a previous Government chargepoint scheme.

Looking into the price of charging at home, we came across EDF Energy’s explanation of tariffs , which goes far more in depth than we could ever hope to. But essentially, yes the cost of charging your care is incorporated into your home electricity bill, but it’s all about picking the right tariff for you, the right car for your needs, off-peak prices (night charging, when the national grid is typically used less) and things like that. There are multiple variables included in choosing the right home-tariff to include an EV. 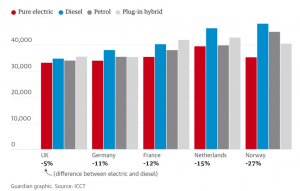 The above graph compares the cost of running electric cars to fuel and hybrid cars across five countries.

Overall, the cost seems to be very similar, if not, cheaper. NewMotion have done a comprehensive look at the comparison of costs for EVs, diesel and petrol engines, and handily included hybrids also.

So far, there is no evidence to suggest that running a battery operated car is any more dangerous than a petrol/diesel engine. ‘The Lithium-ion battery is combustible and can catch fires, it has power cells that can cause short-circuiting if it is damaged. However, lithium-ion batteries have a much lower risk of fire explosions than gasoline in conventional vehicles. To prevent external damage or short circuit, electric vehicle batteries are usually surrounded by a protective cooling shroud filled with coolant liquid. In addition, in spite of external cooling, all electric vehicles are installed in an array rather than one huge lithium-ion battery pack to prevent damage from malfunction.’ (Source: Kia.com)

The other safety concern with EVs, is just how quiet they are. We’re sure you remember being taught the ‘Stop. Look. Listen.’ in your road safety workshops when you were in primary school, or remember those adorable little hedgehogs in the TV advert campaign? Well, EVs are a lot quieter on the roads, almost silent in fact. So listening out for them when crossing the road will be harder for those who are partially sighted, or even your average person wearing headphones.

However, this issue does seem to have been acknowledged by the UK government. From July 1st 2019, manufacturers have had to install acoustic sound systems to EVs and hybrids that are deemed too quiet. Vehicles will now have systems to produce a sound when they are reversing or driving below 20 kilometres per hour (km/h, about 12mph) providing greater confidence to vulnerable road users.

The question that remains still, is simply; are we ready? The UK Government were one of the first to announce the ban on selling petrol and diesel powered cars from 2030 (which had been 2050 originally!), hoping to become one of the leading governments in the quest for zero-emission transport. It put the pressure on automotive companies to comply, and it might be putting pressure on the public to make the switch too. The information surrounding how exactly the public can switch and how affordable that is needs to be more easily accessible and talked about in a much more open and easy-to-understand way.

With how fast the automotive industry is having to adapt, it’s no wonder it’s sending people into a head-spin! The time to really introduce the world of electric vehicles is now!